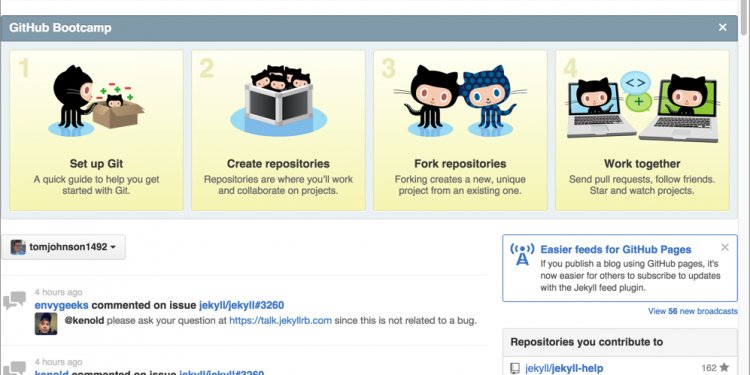 Traditional version control helps you backup, track and synchronize files. Distributed version control makes it easy to share changes. Done right, you can get the best of both worlds: simple merging and centralized releases.

Nothing — read a visual guide to version control if you want a quick refresher. Sure, some people will deride you for using an “ancient” system. But you’re still OK in my book: using any VCS is a positive step forward for a project.

Centralized VCS emerged from the 1970s, when programmers had thin clients and admired “big iron” mainframes (how can you not like a machine with a then-gluttonous 8 bits to a byte?).

Centralized is simple, and what you’d first invent: a single place everyone can check in and check out. It’s like a library where you get to scribble in the books.

This model works for backup, undo and synchronization but isn’t great for merging and branching changes people make. As projects grow, you want to split features into chunks, developing and testing in isolation and slowly merging changes into the main line. In reality, branching is cumbersome, so new features may come as a giant checkin, making changes difficult to manage and untangle if they go awry.

Sure, merging is always “possible” in a centralized system, but it’s not easy: you often need to track the merge yourself to avoid making the same change twice. Distributed systems make branching and merging painless because they rely on it.

Other tutorials have plenty of nitty-gritty text commands; here’s a visual look. To refresh, developers use a central repo in a typical VCS:

Sue’s change must go into main before it can be seen by others. Yes, theoretically Sue could make a new branch for other people to try out her changes, but this is a pain in a regular VCS.

In a distributed model, every developer has their own repo. Sue’s changes live in her local repo, which she can share with Joe or Eve:

But will it be a circus with no ringleader? Nope. If desired, everyone can push changes into a common repo, suspiciously like the centralized model above. This franken-repo contains the changes of Sue, Joe and Eve.

I wish distributed version control had a different name, such as “independent”, “federated” or “peer-to-peer.” The term “distributed” evokes thoughts of distributed computing, where work is split among a grid of machines (like searching for signals with SETI@home or doing protein folding).

A DVCS is not like Seti@home: each node is completely independent and sharing is optional (in Seti you must phone back your results).

Mercurial is a fast, simple DVCS. The nickname is hg, like the element Mercury.

Once Mercurial has initialized a directory, it looks like this:

In our distributed example, Sue, Joe and Eve have their own repos, with independent revision histories.