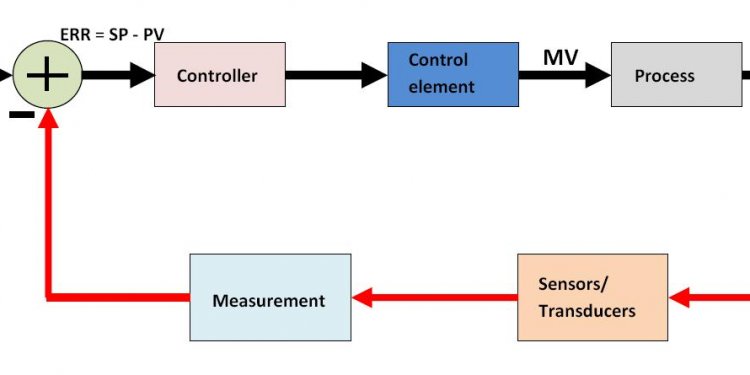 Control as a feedback system

This is a basic feedback structure. Here, we are using the output value of the system to help us prepare the next output value. In this way, we can create systems that correct errors. Here we see a feedback loop with a value of one. We call this a unity feedback.

Here is a list of some relevant vocabulary, that will be used in the following sections:

Plant The term "Plant" is a carry-over term from chemical engineering to refer to the main system process. The plant is the preexisting system that does not (without the aid of a controller or a compensator) meet the given specifications. Plants are usually given "as is", and are not changeable. In the picture above, the plant is denoted with a P. Controller A controller, or a "compensator" is an additional system that is added to the plant to control the operation of the plant. The system can have multiple compensators, and they can appear anywhere in the system: Before the pick-off node, after the summer, before or after the plant, and in the feedback loop. In the picture above, our compensator is denoted with a C.

Some texts, or texts in other disciplines may refer to a "summer" as an adder.

Summer A summer is a symbol on a system diagram, (denoted above with parenthesis) that conceptually adds two or more input signals, and produces a single sum output signal. Pick-off node A pickoff node is simply a fancy term for a split in a wire. Forward Path The forward path in the feedback loop is the path after the summer, that travels through the plant and towards the system output. Reverse Path The reverse path is the path after the pick-off node, that loops back to the beginning of the system. This is also known as the "feedback path". Unity feedback When the multiplicative value of the feedback path is 1.

In the previous chapter, we showed you this picture:

Now, we will derive the I/O relationship into the state-space equations. If we examine the inner-most feedback loop, we can see that the forward path has an integrator system, 1s{\displaystyle {\frac {1}{s}}}, and the feedback loop has the matrix value A. If we take the transfer function only of this loop, we get:

We can see that the upper path (D) and the lower-path Tlower are added together to produce the final result:

Now, for an alternate method, we can assume that x' is the value of the inner-feedback loop, right before the integrator. This makes sense, since the integral of x' should be x (which we see from the diagram that it is. Solving for x', with an input of u, we get:

If we keep things in terms of x and u, we can see that the system output is the sum of u times the feed-forward value D, and the value of x times the value C:

These last two equations are precisely the state-space equations of our system.

We can solve for the output of the system by using a series of equations:

and when we solve for Y(s) we get:

The reader is encouraged to use the above equations to derive the result by themselves.

Here is a simple example of reference inputs and feedback systems:

Let's say that the elevator is on the first floor, and the button "5" is pressed at time t0. The reference input then becomes a step function:

Where we are measuring in units of "floors". At time t0, the error signal is:

Which means that the elevator needs to travel upwards 4 more floors. At time t1, when the elevator is at the second floor, the error signal is:

Which means the elevator has 3 more floors to go. Finally, at time t4, when the elevator reaches the top, the error signal is:

And when the error signal is zero, the elevator stops moving. In essence, we can define three cases: