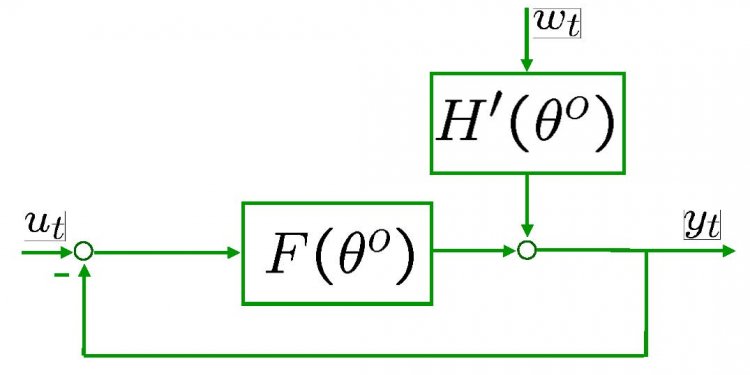 When we design a controller, we usually also want to compensate for disturbances to a system. Let's say that we have a system with a disturbance that enters in the manner shown below.

We can find the steady-state error due to a step disturbance input again employing the Final Value Theorem (treat () = 0).

When we have a non-unity feedback system we need to be careful since the signal entering () is no longer the actual error (). Error is the difference between the commanded reference and the actual output, () = () - (). When there is a transfer function () in the feedback path, the signal being substracted from () is no longer the true output (), it has been distorted by (). This situation is depicted below.

Manipulating the blocks, we can transform the system into an equivalent unity-feedback structure as shown below.

Then we can apply the equations we derived above.

Therefore, a system can be type 0, type 1, etc. The following tables summarize how steady-state error varies with system type.

Consider a system of the form shown below.

For this example, let () equal the following.

We know from our problem statement that the steady-state error must be 0.1. Therefore, we can solve the problem following these steps:

Let's see the ramp input response for = 37.33 by entering the following code in the MATLAB command window.

In order to get a better view, we must zoom in on the response. We choose to zoom in between time equals 39.9 and 40.1 seconds because that will ensure that the system has reached steady state.

Examination of the above shows that the steady-state error is indeed 0.1 as desired.

Now let's modify the problem a little bit and say that our system has the form shown below.

In essence we are no distinguishing between the controller and the plant in our feedback system. Now we want to achieve zero steady-state error for a ramp input.