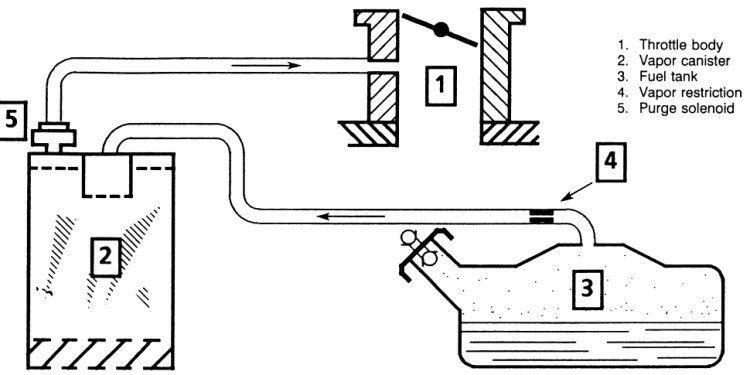 The fuel we put in our cars contains more than 150 chemicals, including benzene, toluene and sometimes even lead. These ingredients can cause dizziness, breathing problems and headaches when they're inhaled. Inhaling large amounts of gasoline fumes can even cause death. On top of all that, evaporated gasoline is one of the leading causes of smog and air pollution.

For these reasons, carmakers are required to install systems on their vehicles that help mitigate gasoline evaporations. Environmental regulation in the United States began in earnest in the early 1970s, and as a result, cars have had evaporative emission control (EVAP) systems ever since. These systems are designed to store and dispose of fuel vapors before they can escape into the atmosphere.

A typical system consists of a small canister full of charcoal, valves, hoses, vents in the fuel lines and a sealed fuel tank cap. When fuel evaporates inside the gas tank, the excess vapors are transferred to the charcoal canister. They're stored there until they can safely be transferred back to the engine to be burned with the normal air-fuel mixture.

When that's ready to happen, a valve creates a vacuum that draws the vapors into the engine. Fresh air is also drawn in through the vents and valves to mix with the vapors for better combustion. These systems can be controlled mechanically, or like on most on newer cars, through the engine's computer. The computer tells the valves when to purge the canister of vapors. This typically happens when the car is in motion, rather than at idle. It's just one example of some of the behind-the-scenes technology that you'll likely never see or feel.

As you may expect, things can go wrong with the EVAP system, too. If the canister fails to purge or does so under the wrong conditions, it can hamper the performance and emissions of your vehicle. When this happens, you may find that the entire system needs to be replaced.