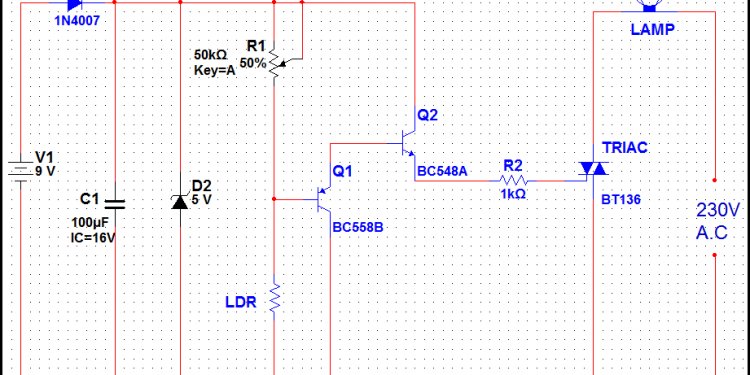 Components Used in this Circuit:

LDR: LDR is a device whose sensitivity depends upon the intensity of light falling on it. When the strength of the light falling on LDR increases the LDR resistance decreases, while if the strength of the light falls on LDR is decreased resistance increased. In the time of darkness or when there is no light, the resistance of LDR is in the range of mega ohms, while in the presence of light or in brightness in decrease by few hundred ohms.

Testing of LDR- Before mounting any component in the circuit it is a good practice to check whether a component works properly or not so that you can avoid consumption of time in troubleshooting. For testing LDR set the range of multimeter in resistance measurement. After that put the lids on the legs of LDR ( as LDR have no polarity so you can connect any lid with leg). Measure the resistance of LDR in the light or brightness, resistance must be low. Now cover LDR properly so that no light beam fall in it, again measure the resistance it must be high. If you got the same result means that LDR is good.

Resistor: It is a passive component having two terminals that are used to manage the current flow in the circuit. A current that flows via a resistor is directly proportional to the voltage that appeared into the resistor.

Resistors are of two types –

Value of resistance can be calculated with the help of multimeter or with the color code that is visible on the resistor.

There are two types of capacitors –

i) Polarized – They have polarity means + and- sign marked on it. It is mainly used to store the charges. Before troubleshooting the circuit capacitors must be fully discharged as they have charges store in it.
ii) Non-polarized – They don’t have a polarity and can be mounted in any of the way. They are generally used to remove the noises present during the conversion of AC into DC.

Relay: It provides isolation between the controller and the device because as we know devices may work on AC as well as on DC but they receive signals from microcontroller which works on DC hence we require a relay to bridge the gap. The relay is extremely useful when you need to control a large amount of current or voltage with the small electrical signal.

Factors for Selecting an Appropriate Relay:

But in dimness or in night we know that resistance of LDR is high hence voltage at inverting input pin 2 of the IC CA3140 decreases than the non inverting input pin 3 as a result output pin 6 moves to high state which make transistor to conduct and the LED or bulb associated to it start simmering.

We need to pay attention while connecting relay with bulb. As different bulbs have different wattage, so it must support the relay or else relay will not energize.