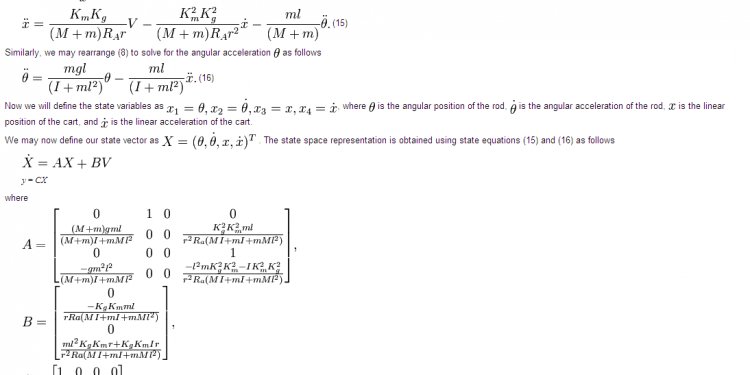 Note: Bold face characters denote a vector or matrix.The variable x is more commonly used in textbooks and other references than is the variable q when state variables are discussed. The variable q will be used here since we will often use to represent position.

For systems with a single input and single output (i.e., most of the systems we will consider) these variables become (with r=1 and m=1):

Advantages of this representation include:

We can define 4 new variables, q1 through q4.

This is compactly written in state space format as

For this problem a state space representation was easy to find. In many cases (e.g., if there are derivatives on the right side of the differential equation) this problem can be much more difficult. Such cases are explained in the discussion of .

In this case the new state space variables are given by:

This new state space system is quite different from the original one, and it is not at all obvious that they represent the same system. (It can be shown that the systems are identical by transforming the state space representation to a transfer function. Techniques for doing so are discussed elsewhere.)