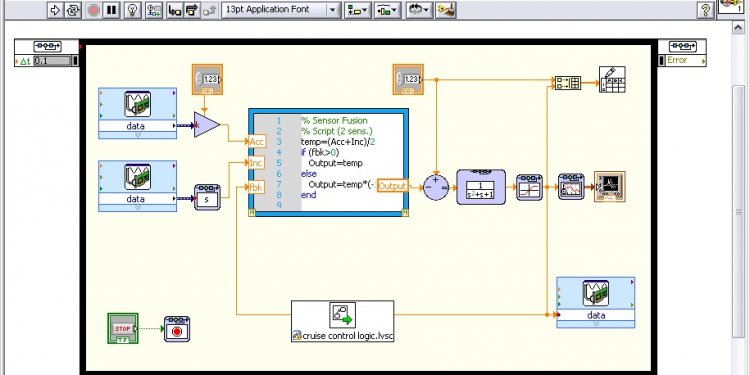 This example shows how to use the Control System Tuner app to tune a MIMO, multiloop control system modeled in Simulink.

Control System Tuner lets you model any control architecture and specify the structure of controller components, such as PID controllers, gains, and other elements. You specify which blocks in the model are tunable. Control System Tuner parameterizes those blocks and tunes the free parameters system to meet design requirements that you specify, such as setpoint tracking, disturbance rejection, and stability margins.

This example uses the Simulink model rct_helico. Open the model.

The control system of the model has two feedback loops. The inner loop provides static output feedback for stability augmentation and decoupling, represented in the model by the gain block SOF. The outer loop has a PI controller for each of the three attitude angles. The controller generates commands ds, dc, dT in degrees for the longitudinal cyclic, lateral cyclic, and tail rotor collective using measurements of theta, phi, p, q, and r. This loop provides the desired setpoint tracking for the three angles.

This example uses these control objectives:

Set Up the Model for Tuning

Using Control System Tuner, you can jointly tune the inner and outer loops to meet all the design requirements. To set up the model for tuning, open the app and specify which blocks of the Simulink model you want to tune.

In Control System Tuner, on the Tuning tab, click Select Blocks. Use the Select tuned blocks dialog box to specify the blocks to tune.

Click Add Blocks. Control System Tuner analyzes your model to find blocks that can be tuned. For this example, the controller blocks to tune are the three PI controllers and the gain block. Check the corresponding blocks PI1, PI2, PI3, and SOF.

When you select a block to tune, Control System Tuner automatically parametrizes the block according to its type and initializes the the parametrization with the block value in the Simulink model. In this example, the PI controllers are initialized to and the static output-feedback gain is initialized to zero on all channels. Simulating the model shows that the control system is unstable for these initial values.

First, create a tuning goal for the setpoint-tracking requirement on theta, phi, and r. On the Tuning tab, in the New Goal drop-down list, select Tracking of step commands.

In the Simulink model editor, select the reference signals theta_ref, phi_ref, and r_ref. These signals appear in the Select signals dialog box. Click Add Signal(s) to add them to the step tracking goal.

Next, specify the outputs that you want to track those references. Under Specify step-response outputs, add the outputs theta, phi, and r.

The requirement is that the responses at the outputs track the reference commands with a first-order response that has a one-second time constant. Enter these values in the Desired Response section of the dialog box. Also, for this example set Keep mismatch below to 20. This value sets a 20% relative mismatch between the target first-order response and the tuned response.

This figure shows the configuration of the Step Tracking Goal dialog box. Click OK to save the tuning goal.