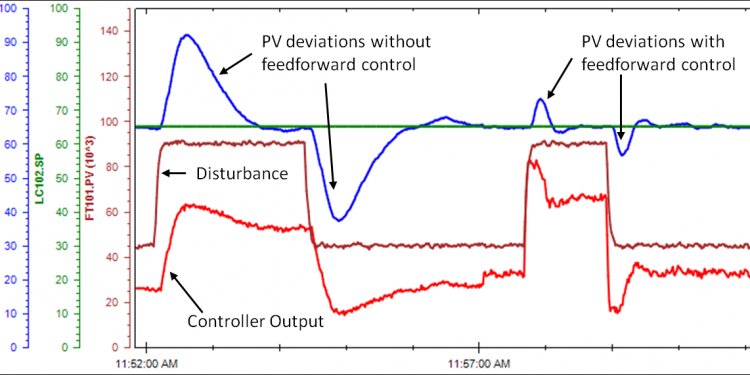 Effect of feedback in control system

As we have seen, open-loop systems are just that, open ended, and no attempt is made to compensate for changes in circuit conditions or changes in load conditions due to variations in circuit parameters, such as gain and stability, temperature, supply voltage variations and/or external disturbances. But the effects of these “open-loop” variations can be eliminated or at least considerably reduced by the introduction of Feedback.

A feedback system is one in which the output signal is sampled and then fed back to the input to form an error signal that drives the system. In the previous tutorial about Closed-loop Systems, we saw that in general, feedback is comprised of a sub-circuit that allows a fraction of the output signal from a system to modify the effective input signal in such a way as to produce a response that can differ substantially from the response produced in the absence of such feedback.

Feedback Systems are very useful and widely used in amplifier circuits, oscillators, process control systems as well as other types of electronic systems. But for feedback to be an effective tool it must be controlled as an uncontrolled system will either oscillate or fail to function. The basic model of a feedback system is given as:

This basic feedback loop of sensing, controlling and actuation is the main concept behind a feedback control system and there are several good reasons why feedback is applied and used in electronic circuits:

Whilst there are many different types of control systems, there are just two main types of feedback control namely: Negative Feedback and Positive Feedback.

In a “positive feedback control system”, the set point and output values are added together by the controller as the feedback is “in-phase” with the input. The effect of positive (or regenerative) feedback is to “increase” the systems gain, ie, the overall gain with positive feedback applied will be greater than the gain without feedback. For example, if someone praises you or gives you positive feedback about something, you feel happy about yourself and are full of energy, you feel more positive.

However, in electronic and control systems to much praise and positive feedback can increase the systems gain far too much which would give rise to oscillatory circuit responses as it increases the magnitude of the effective input signal.

An example of a positive feedback systems could be an electronic amplifier based on an operational amplifier, or op-amp as shown.

Positive feedback control of the op-amp is achieved by applying a small part of the output voltage signal at Vout back to the non-inverting ( + ) input terminal via the feedback resistor, RF.

If the input voltage Vin is positive, the op-amp amplifies this positive signal and the output becomes more positive. Some of this output voltage is returned back to the input by the feedback network.

Thus the input voltage becomes more positive, causing an even larger output voltage and so on. Eventually the output becomes saturated at its positive supply rail.

Likewise, if the input voltage Vin is negative, the reverse happens and the op-amp saturates at its negative supply rail. Then we can see that positive feedback does not allow the circuit to function as an amplifier as the output voltage quickly saturates to one supply rail or the other, because with positive feedback loops “more leads to more” and “less leads to less”.

Then if the loop gain is positive for any system the transfer function will be: Av = G / (1 – GH). Note that if GH = 1 the system gain Av = infinity and the circuit will start to self-oscillate, after which no input signal is needed to maintain oscillations, which is useful if you want to make an oscillator.

Although often considered undesirable, this behaviour is used in electronics to obtain a very fast switching response to a condition or signal. One example of the use of positive feedback is hysteresis in which a logic device or system maintains a given state until some input crosses a preset threshold. This type of behaviour is called “bi-stability” and is often associated with logic gates and digital switching devices such as multivibrators.

We have seen that positive or regenerative feedback increases the gain and the possibility of instability in a system which may lead to self-oscillation and as such, positive feedback is widely used in oscillatory circuits such as Oscillators and Timing circuits.

In a “negative feedback control system”, the set point and output values are subtracted from each other as the feedback is “out-of-phase” with the original input. The effect of negative (or degenerative) feedback is to “reduce” the gain. For example, if someone criticises you or gives you negative feedback about something, you feel unhappy about yourself and therefore lack energy, you feel less positive.

Because negative feedback produces stable circuit responses, improves stability and increases the operating bandwidth of a given system, the majority of all control and feedback systems is degenerative reducing the effects of the gain.

An example of a negative feedback system is an electronic amplifier based on an operational amplifier as shown.

Negative feedback control of the amplifier is achieved by applying a small part of the output voltage signal at Vout back to the inverting ( – ) input terminal via the feedback resistor, Rf.

If the input voltage Vin is positive, the op-amp amplifies this positive signal, but because its connected to the inverting input of the amplifier, and the output becomes more negative. Some of this output voltage is returned back to the input by the feedback network of Rf.

Thus the input voltage is reduced by the negative feedback signal, causing an even smaller output voltage and so on. Eventually the output will settle down and become stabilised at a value determined by the gain ratio of Rf ÷ Rin.